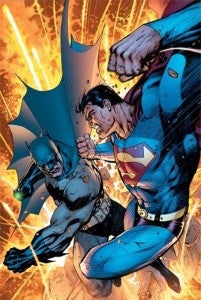 At the end of the Warner Bros. panel at 2013 San Diego Comic-Con, Man Of Steel director Zack Snyder showed up to make what would be the biggest movie announcement of Comic-Con. Not only would there be a follow-up to the Man Of Steel, but the follow-up would involve both Superman and Batman. While there is still not a lot known about the movie, Comicbook.com has put together five secrets that were revealed both at Comic-Con and through the press materials. The Old Gang Is Getting Back Together – Meet the new Superman Vs. Batman movie  team, same as the old Man Of Steel team. Director Zack Snyder, writer David S. Goyer, producer Christopher Nolan, star Henry Cavill, and pretty much every one else associated with the Man Of Steel will be back for the next Superman movie. There's Going To Be A Big Fight – When reports of Superman and Batman appearing in a movie together initially broke, it was usually referred to as a team-up movie. However, subsequent comments by those involved have made it very clear that it is going to be a fight movie. For one, director Zack Snyder chose to have Harry Lennix read a quote from The Dark Knight Returns, which revolved around Batman beating Superman. For two, writer David S. Goyer brought up Superman Vs. Batman or Batman Vs. Superman when mentioning title possibilities at the Superman 75th Anniversary panel at Comic-Con. And finally, the official Warner Bros. press release quoted Zack Snyder saying, "Let's face, it, it's beyond mythological to have Superman and our new Batman facing off…" Snyder didn't say teaming up, he said "facing off," which means they will be at odds. There's Going To Be A New Batman – While a lot of fans would love to see Christian Bale return as Batman, the actor has repeatedly stated that he is done playing Batman. If there was any doubt, there are a number of references in the Warner Bros. press release which make it clear there will be a new Batman. First, Warner Bros. specifically states "the new Batman has yet to be cast." Second, Zack Snyder is quoted, specifically referring to Batman as "our new Batman." Third, executive producer Emma Thomas is quoted as saying, "Whilst our Dark Knight trilogy is complete, we have every confidence that Zack's fresh interpretation will take the character in a new and exciting direction." The Zod Issue Will Be Dealt With – While it was a little unclear if the film will be technically called a sequel, it was made pretty clear the movie would be a follow-up to the Man Of Steel. In addition to most of the Man Of Steel cast returning, writer David S. Goyer mentioned in the Superman 75th Anniversary Panel that the events at the end of Man Of Steel would be addressed in this next Superman movie. While this is speculation, could it be the massive property destruction and the killing of Zod which puts Batman and Superman at odds? Maybe, Batman takes issue with the massive loss of life and feels like Superman has to be stopped for the good of humanity. Summer Of 2015 Will Be The Release Date – In the Warner Bros. press release, it states, "Production is expected to begin in 2014, with an anticipated release date in Summer 2015." Considering that Warner Bros is going to go through the summer of 2014 watching 20th Century Fox, Sony, and Marvel Studios rake in the box office dollars with their respective superhero franchises, the chances that Warner Bros. pushes back the release date are pretty close to zero. Warner Bros. will not only release a Man Of Steel movie in summer of 2015, they have to in order not to get absolutely crushed by all the other studios.