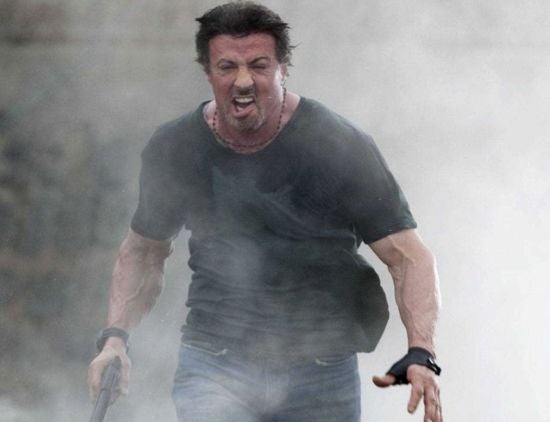 In a new video created by Total Film, iconic screen tough guy Sylvester Stallone weighed in on Superman vs. Batman, saying that he preferred the Man of Steel to the Dark Knight. "I got a little carried away with Superman once, when I was about eight years old," confessed Stallone. "I dyed a blue shirt, took a crayon, wrote an 'S' on it, took a barber's cape, cut it into points, tied it around my neck and put it under my clothes. And I sat next to a guy named Jimmy Cole, and I go 'Jimmy, don't say anything to anybody but--'" he mimed opening his shirt "'--that's who I really am.' Of course, he calls the teacher and I have to take my clothes off in front of the class. I'm standing here with these rickety, stupid legs, pencil-thin arms, a barber's cape with an 'S' on it that's backwards, blue tights and...so, I just flew away. So I have to go with Superman, even though Batman is the better costume." For DeNiro's part, he mumbled through a response that included "I guess I'd say Superman," but mostly consisted of an admission that he's never been into superheroes and instead enjoyed Universal's monsters at the movies when he was younger. He hoped, he told Total Film, to one day see Abbott and Costello meet Frankenstein--and years later discovered that they had done so before he was ever born. Of course, there was no home video market back then... You can check out the video, which includes a lot of discussion about Batman vs. Superman casting rumors and a few more celebrities sounding off about which hero they like better, below.