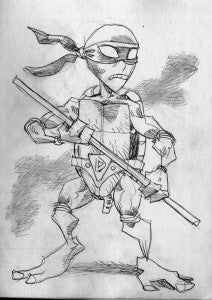 According to Bleeding Cool, an insider close to the production of Michael Bay's upcoming relaunch of the Teenage Mutant Ninja Turtles movie franchise has confirmed that the film's working title will simply be Ninja Turtles. Whether this means that the alien, martial arts-using turtle-like heroes won't actually be teenagers remains to be seen; a trend toward simple titles has been present in Hollywood in recent years--as has shortening (or just altering) film titles on popular franchises like Batman and Superman to fit more closely with the way they're talked about by fans. Since TMNT, one of the fan-shorthand ways to talk about the Teenage Mutant Ninja Turtles was already taken by the 2007 animated feature film, Ninja Turtles is as good as anything in terms of matching titles like The Dark Knight and Man of Steel. Bleeding Cool also speculated that the film might not only dodge the question of the Turtles' age, but also play down some of the characters' more youthful characteristics. Director Jonathan Liebesman avoided answering exactly that question in an interview with Cinema Blend yesterday, where he suggested that some of the Turtles' '90s-teen-style catchphrases ("Cowabunga!") might or might not make it into the film. The image at right, which also ran on a recent Bleeding Cool story, was drawn by longtime Teenage Mutant Ninja Turtles artist Jim Lawson as part of a series of tongue-in-cheek "alien Ninja Turtles" sketches.