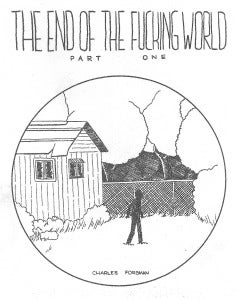 A new video series by director Jonathan Entwhistle (anybody know for sure if he's related to The Who's John Entwhistle?) will adapt Chuck Forsman's indie comic The End of the F---ing World, reports The Beat. The series, originally published as mini-comics, has been collected by Fantagraphics. It revolves around a pair of (deeply disturbed) teenagers who camp out in a deserted house, with a story that takes a turn for the darker and more twisted when the property owner comes home. Craig Roberts and Jessica Barden star in the pilot, currently in production, which will be shot as a series for release on Vimeo if picked up by Film4.

Charles Forsman's TEOTFW Headed Into Production in the UK