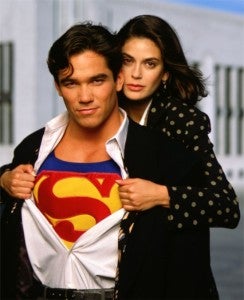 Back in June, Margot Kidder, who played Lois Lane in the 1978 Superman The Movie and its sequels, weighed in with her thoughts on the recent Man Of Steel movie. While Kidder found the movie to be "wonderful," her one complaint was that she would have liked to seen more scenes for Amy Adams as Lois Lane in the movie. Now, another Lois Lane has weighed in with her thoughts on Man Of Steel, and she appears to have a very similar opinion. In an interview with Digital Spy, Teri Hatcher, who played Lois Lane in the TV series Lois & Clark: The New Adventures Of Superman, said that she "really enjoyed" the Man Of Steel. Hatcher explained, "I think what I loved the most about it is just that Superman in general is that people keep wanting to see this story, and everyone that gets to play those characters brings some new fresh, unique take to it. There's always a new level of technology that gets put into the movie making, and that's cool and exciting." However, Hatcher added, "But I think in the end what carries through so strongly is the relationship between Lois & Clark, Lois & Superman, and even in that movie, that was my favorite part of it. And I kind of wished for a little bit more of seeing them and their relationship together, so I look forward to the next one." With the Man Of Steel follow-up scheduled to bring Batman into the picture, it will be interesting to see to what extent Lois Lane appears in the movie. Will Teri Hatcher get her wish or will the relationship between Lois & Clark take a back seat to the relationship between Batman & Superman?