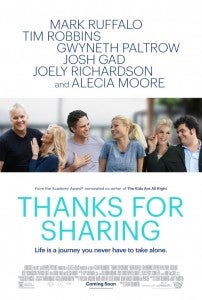 Nothing new hit the theaters in wide release that was of much interest to our readers, but over on the indie side,Roadside/Lionsgate's Thanks For Sharing, opening in limited release and with almost no promotion, opened in 269 theaters and starred Marvel's The Avengers standout Mark Ruffalo, Iron Man 3 leading lady Gwyneth Paltrow and Green Lantern villain Tim Robbins, among others. Even with all that star power, though, the movie averaged just $2,255 per screen for an opening weekend of around $607,000, according to Deadline. Generation Iron, the documentary by graphic novelist Vlad Yudin that's being billed as a semi-official sequel to the classic Arnold Schwarzenegger bodybuilding film Pumping Iron, opened in 55 theaters. Batman & Robin villain Schwarzenegger and Mickey Rourke of Sin City and Iron Man 2 fame helped drive interest in the film, which examined bodybuilders training to compete for the Mr. Olympia competition, driving it to $240,000 this weekend for a $4,364 average. "We are thrilled with the audience response to the film," Yudin said. "It is wonderful to be able to share such a unique story with the world." Vladar, Yudin's production company, plans to expand the film's release over the next few weeks.

Thanks For Sharing, With Marvel and DC Movie Actors, Takes $600,000 Opening Weekend