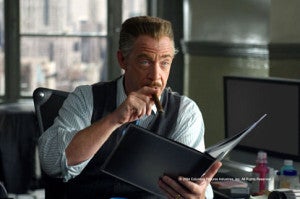 J.K. Simmons, the frequent Coen Brothers collaborator most recognizable to comics fans for his memorable turn as J. Jonah Jameson in Sam Raimi's Spider-Man trilogy is one of only a very few players fans had considered plausible to reprise his role in Marc Webb's Amazing Spider-Man films. He is, in fact, playing the role on Ultimate Spider-Man for Disney XD, meaning that the odds seemed to be in his favor if and when Jameson came up in the Webb films. "There's always talk," Simmons told MTV Geek when asked whether he had considered returning to the rebooted franchise. "I'm doing it in animation land, but Sam Raimi's take on the world of Spider-Man has run its course. We were all excited and ramping up for Spider-Man 4 a few years ago, but for a variety of ridiculous showbiz reasons it ended up not happening. The reboot is a very different universe. Both versions are legitimate, and this one doesn't have a J. Jonah Jameson so far. As far as I know, I won't be putting on the flat-top again." So it seems, provided he's not covering, that rumblings from back before the filming that Simmons might return to the Webb films as Jameson are--for now, at least--unfounded. Of course, it would be hard to find someone who fit the role as perfectly as Simmons, and since his role in the films is a tangential one, there are still plenty of fans who see him as a legitimate candidate for the part, should the need for JJJ arise.