Well, they did promise us it would be just two days. Another new trailer for Sony's upcoming sequel The Amazing Spider-Man 2 has dropped this morning, this time focusing heavily on the rise of Electro. It gives a little bit more of his "You wanted to be the hero" speech, and a tiny snippet of dialogue that gives a lot of insight into what makes Harry Osborn's deranged mind tick. 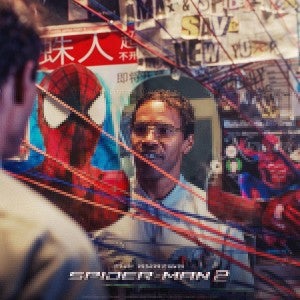 There seem to be more effects that are closer to being ready to go this time around, too, since we see a lot more in the way of Electro's powers up close and personal rather than just in the wide shots designed for earlier trailers--and (as you can see, very blurry, above) our first look at Harry's Goblin Glider in action--apparently inside the building (clock tower?) where we've seen Spider-Man and Gwen crash through the roof a few times now. There's more of that, too, and a very loaded "what if something happens to you because of me," paired immediately with a series of shots of Gwen in danger, one of which is the shot from the Super Bowl trailer which some have speculated may actually prove to be her death. If that does turn out to be the case, The Amazing Spider-Man 2 might be the most aggressively and willfully spoiled film since Titanic--and presumably all in the name of trying to generate interest and box office dollars. Perhaps that's not surprising; despite solid reviews and a lot of opening-weekend enthusiasm, The Amazing Spider-Man generated less money both domestically and globally than any of the Sam Raimi Spider-Man films. That's with the presumed 3-D bump. Nevertheless, Sony--who have reportedly surrendered the Ghost Rider rights back to Marvel rather than run the risk of using him in another film--are building a little niche Spider-Man Universe around the film, introducing a trio of new villains and some puppet masters in this one while setting up Venom and Sinister Six movies to take place over the next few years. Anyway, the film looks great. It's out in April in the U.K. and much of Europe, then the first week in May in the United States--which means you'll get doubly spoiled by the time it's actually in a theater near you.