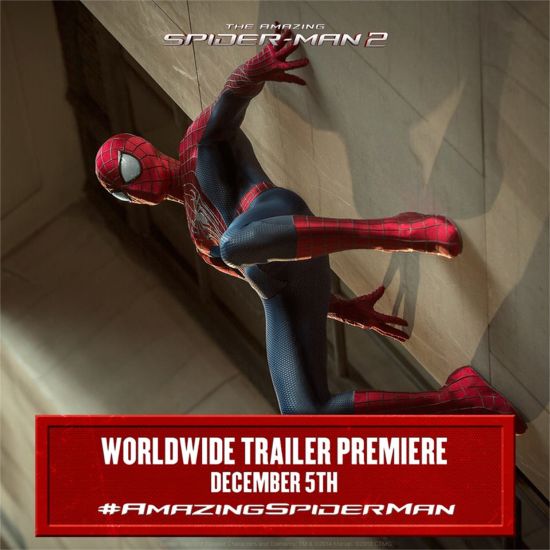 A little over a week ago, Comicbook.com reported on a rumor that The Amazing Spider-Man 2 trailer would debut online on December 5, 2013. It has now been confirmed that rumor was indeed correct. On the official Amazing Spider-Man movie Facebook page, Sony Pictures announced this morning that the worldwide trailer premiere date for The Amazing Spider-Man 2 would be December 5th. Sony Pictures also announced there would be a sneak peek of the trailer on Good Morning America on the morning of December 5th. In The Amazing Spider-Man 2, for Peter Parker (Andrew Garfield), life is busy -- between taking out the bad guys as Spider-Man and spending time with the person he loves, Gwen (Emma Stone), high school graduation can't come quickly enough. Peter hasn't forgotten about the promise he made to Gwen's father to protect her by staying away -- but that's a promise he just can't keep. Things will change for Peter when a new villain, Electro (Jamie Foxx), emerges, an old friend, Harry Osborn (Dane DeHaan), returns, and Peter uncovers new clues about his past. The Amazing Spider-Man 2 is set to be released in movie theaters on May 2, 2014.