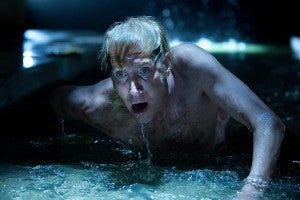 Dr. Curt Connors appears to be having some difficulty maintaining his composure in two new videos from the viral campaign for The Amazing Spider-Man. Rhys Ifans, who plays the scientist who appears to be withholding key information about Spider-Man's parents in the upcoming reboot, is acting erratically and appears to be in some pain in a pair of new clips that may show a man on his way to becoming The Lizard. If he has been testing it on himself, though, hes not sharing with the audience: "Still too early for human testing, but I've been hypothesizing on the potential side effects. If we were to go that route, nausea, intermittent loss of consciousness and other transcendent physiological ramifications," Connors says in the videos. "More research required if we want to avoid these outcomes before involving human subjects--hypothetically speaking, of course." The timeline for the viral videos has been unclear; while some of them clearly seem to take place before the events of the film, looking to fill an internship role that it appears Peter Parker may be poised to take himself. Others, such as these, suggest that Dr. Connors has already dosed himself with the Lizard serum and that trouble is on the way--something that Peter has blamed himself for in trailers for the film. Check them out below, and let us know whether you think.