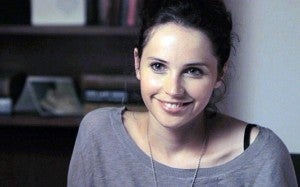 Fans paying attention to the casting and filming process of Marc Webb's The Amazing Spider-Man 2 probably will already have a working assumption as to who Felicity Jones might be playing. The U.K.-born actress, who has starred in a number of small British films, is breaking into Hollywood in a big way with a mystery role in the superhero franchise, which she describes as "top secret." Even though it seems as though she's already semi-confirmed it. "I can tell you that she's sort of on the baddie's side, but I can't explain much more than that," Jones told the Belfast Telegraph. "Just the scale was incredible. It's a different challenge to be on an enormous set, surrounded by hundreds of extras, as opposed to just being 20 people in the room." Of course, earlier this week, Jones gave an interview in which she was thrown a question as to whether she was anxious for audiences to see her play Black Cat (also known as Felicia Hardy, the Catwoman proxy who is Spider-Man's sometime love interest and occasional nemesis). Jones stuttered through the answer a bit, not really quite confirming it but giving many fans reason to believe that's exactly who she'll be before concluding with "that would be great if it happened." You can check out that interview below.