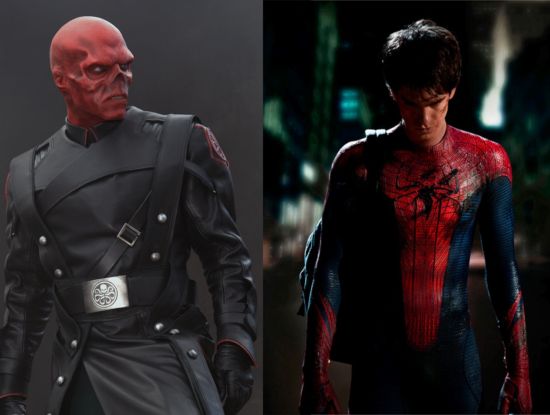 Everybody wants to know what's going to happen in The Avengers movie, but it seems like the only information that Joss Whedon is willing to turn loose of is what is not going to happen in the movie. Who is Loki's army? Is there a mystery villain? While those questions might remain unanswered, we've compiled this handy-dandy list of things that Whedon says you can look forward to not seeing in The Avengers. No Spider-Man – When Joss Whedon did a Twitter chat, the subject of Spider-Man came up, and he denied that Spider-Man would be appearing in the movie. Of course, his denial hasn't stopped people from continuing to ask him. Now, Total Film has asked him, and once again, Whedon says, "There is no Spider-Man in this movie!" And just in case Whedon might be lying, MTV even asked Andrew Garfield, who also confirmed that he didn't get a call to appear in The Avengers. No Skrulls – Everyone seems to think there are Skrulls in The Avengers. A toy manufacturer even went as far as to make a prototype toy containing something that looks a lot like Skrulls, but Skrulls have been double-denied as having a presence in The Avengers. First, Marvel Studios President of Production Kevin Feige told Empire Magazine, "It's not Skrulls. I've been clear about that." Then, just to make sure that fans got the message, Joss Whedon re-affirmed to a crowd at SXSW that there would be no Skrulls in The Avengers. No Kree – Well, if there aren't any Skrulls, then Marvel's second best known alien race has to be present, right? While Kevin Feige cast doubt on the presence of Kree to Empire Magazine, he left the door just a little bit open. However, Joss Whedon slammed that door shut by announcing at SXSW, "It is not the Kree or the Skrulls." No Ant-Man – Ok, we get it that Sony owns the rights to Spider-Man, so Marvel Studios probably couldn't include him even if they wanted to. But there are plenty of other characters in the Marvel Universe that Marvel Studios retains the film rights to. Can we get an Ant-Man cameo? You know, just a little something to set him up for his own long-rumored feature film. Back in 2010 at Comic-Con, Whedon got our hopes up by teasing that Nathan Fillion would be playing Ant-Man in The Avengers. However, it turns out that Whedon was only joking, as he later told IO9, "Ant-Man does not appear in The Avengers." No Red Skull – So, it doesn't look like we can expect any unexpected superhero cameos. Considering that there are already six superheroes in The Avengers, we can understand the idea of trying to sneak one more in would be a little bit of overkill. But, what about an extra mystery villain to work alongside Loki? Could Captain America's nemesis Red Skull pop up? Nope on that one as well, as Kevin Feige also told Empire Magazine, "It would be fun to see Skull in future, but he's not in this one." To wrap it up, fans can look forward to no Spider-Man, no Skrulls, no Kree, no Ant-Man, and no Red Skull in The Avengers. Hey, would someone please asked Whedon about Thanos, Atlanteans, or Fin Fang Foom?