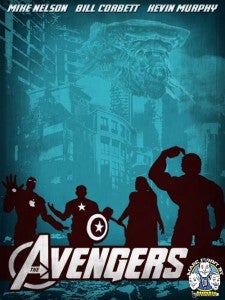 Rifftrax, the Mystery Science Theater 3000 veterans who sell audio commentaries to play over movies both good and bad to make fun of them, have released a new look at Marvel's The Avengers. The film isn't the first superhero movie to be given the Rifftrax treatment, by a longshot, but as the biggest movie of the year and the biggest superhero movie of all time, you can be sure part of the reason they waited this long to get the commentary out was to make sure they got it right. Bill Corbett, Kevin Murphy and Mike Nelson assemble to ask the questions you all want to know: What the hell is Hawkeye doing on The Avengers? Who's standing in for Robert Downey, Jr. in the big fight scene? And why would The Hulk ever wear a thong?! Check out the official teaser text and video below: Earth's Mightiest Generators of Studio Cashflow, Assemble! These heavy-hitting Marvel heroes (and also some bow and arrow guy) are finally together in one place, thanks to Samuel L. Jackson's commitment to hanging out after the credits in their movies. Once fans got over their disappointment that the film's roster didn't include iconic Avenger Dr. Druid (I know, I know, we still can't believe it either) they had to agree this was a pretty fun movie. And it is fun, once you get past the Iron Man quips, the malnourished art major Loki as the primary villain, generic robo-creature-guys from space or wherever -- once you get past all that, you have the true emotional core of the movie: Agent Coulson, and his barely-mentioned off-screen romance with a cellist who recently moved back to Portland. That's what it's really all about, True Believers.