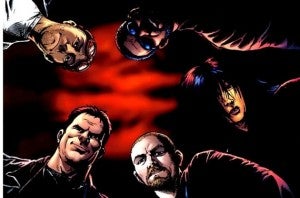 Director Adam McKay surprised a fan on Twitter earlier today by breaking the news that the Garth Ennis/Darick Robertson comic The Boys had been picked up by Paramount Pictures and is still in development, despite earlier reports that it was essentially dead in the water when Columbia nixed the project earlier this year. When fan Shaun Barger tweeted at the director earlier today that he was sorry to hear the film was scrapped, McKay tweeted back at him, "Actually, Paramount picked it up and we're still developing." The Boys, which originated with WildStorm but migrated to Dynamite Entertainment, is a dark comedy about a group of government agents tasked with managing superheores and supervillains that go off the reservation. The often brutal story has run for more than five years and spawned a number of tie-in miniseries but will reportedly end with November's #72. McKay began developing the film adaptation in 2010, two years after Columbia first acquired the rights. It was scrapped there in February of this year and nothing more had been heard until today.