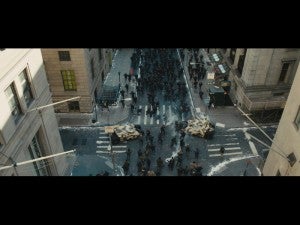 will come to theaters in July and bring both Gotham City, and the Bat-franchise under director Christopher Nolan, down with a wrecking ball. Rumors have run wild about the film since it was announced, but the tight-lipped cast have neither confirmed nor denied most of them. One of the most telling comments that Nolan had made, actually, is that the film is actually based not on the Occupy movement that rose to prominence during the filming of the movie but on Charles Dickens' A Tale of Two Cities, a tale of wealth and despair somewhat older than the year-old protest movement. When talking about the film with Troy Brownfield, creator of the webcomic Sparkshooter, something interesting came up; what if Nolan was being both cagier and more literal than any of us have given him credit for? In Dickens' novel, as Brownfield (a former college professor, and so someone who remembers A Tale of Two Cities much more vividly than I), "Consider that you have the lookalike leads, and one dies for the other to live.  What if Joseph Gordeon-Levitt's whole function [in The Dark Knight Rises] is to die as Batman in order to allow Batman to 'rise'?" And, of course, he's right--there's a theme of duality that runs through the book (something that might suit the legacy of Harvey Dent quite well) and it's not just two cities but two protagonists whose fates intertwine, sometimes tragically, until the day Sydney Carton steps into the guillotine in place of Charles Darnay. Brownfield speculated that maybe we'll see the same happen in The Dark Knight Rises, with John Blake sacrificing himself, maybe while dressed as Batman, to save Bruce. It's a fair theory--a lot of fans and critics have been expecting to see Levitt, a Nolan favorite actor, don the Batman suit at some point in the film, either because Bruce is injured by Bane, dead, or just absent. The latter, points out regular reader Kevin Allen, might hearken back to a hero story older even than Charles Dickens' classic. 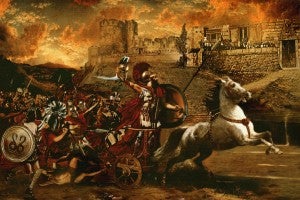 Remember the story of Achilles? During the Trojan War, the great hero Achilles decided that he was done fighting and laid down his arms. Rather than marching into combat, he would sit in his tent, sulk and brood. Not willing to sit back and wait for the end of the war, Achilles' companion Patroclus donned the hero's armor and rode into battle as Achilles, hoping to inspire the troops and force back the Trojans. Despite some success, he was killed in battle by Hector, the Trojan leader in the conflict. Upon discovering this, Achilles entered the fray and didn't come back until he'd killed Hector and paraded his corpse through the streets. Given what we've seen in trailers and ads for The Dark Knight Rises, it doesn't seem beyond the realm of reason to imagine the story playing out similarly: John Blake understands that Gotham needs Batman and, donning a costume, dies at the hands of Bane. When Bruce finds out, whether he's been absent due to injury or simply because he no longer wanted to be Batman, such an event might motivate him (in an Uncle Ben kind of way) to "rise" and put an end to Bane.

The Dark Knight Rises: A Tale of Two Dead Heroes