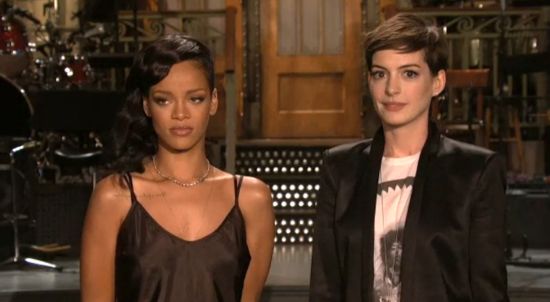 Anne Hathaway, who played Catwoman/Selina Kyle in the Dark Knight Rises, is hosting tonight's episode of Saturday Night Live. Dark Knight Rises co-star Joseph Gordon-Levitt hosted Saturday Night Live earlier this season, but the show failed to mention the summer blockbuster when he appeared. Hopefully, Saturday Night Live won't make the same mistake twice, and we will get to see at least one skit with Anne Hathaway as Catwoman. In a sneak preview promo for the episode, Anne Hathaway appears with Jason Sudekis. They engage in a conversation about the election, where they generically talk about who won with Obama's name inserted as a voiceover.

Of course, Anne Hathaway was a huge Obama supporter and participated in fundraisers for him. At one fundraiser, President Obama said of Hathaway, "I got a chance to see Batman, and she was the best thing in it. That's just my personal opinion." In another sneak peak promo, Anne Hathaway chats with musical guest Rihanna. Hathaway gets snippy when she realized Rihanna has appeared on the show more times than her, but in the next segment Hathaway asks Rihanna if she wants to swap outfits. The Anne Hathaway episode of Saturday Night Live airs on Saturday, November 10, 2012 at 11:30 PM ET on NBC.