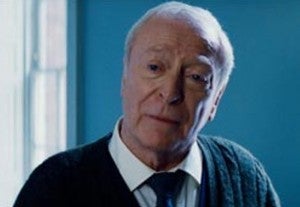 While there has been lots of speculation about spinoffs and sequels for The Dark Knight Rises, Michael Caine has revealed an interesting background story for Bruce Wayne's butler Alfred that could make for a great prequel. In an interview to promote The Dark Knight Rises DVD, Michael Caine says, "I play the butler so you haven't got some great backstory for the blooming butler, but I invented a backstory. Which is Bruce's father went to the S.A.S. headquarters in Herefordshire to see an officer friend, and he was in the officer's mess. And there was a sergeant there who had been badly wounded and couldn't go back to the war and he didn't want to go into civvy street.  So he'd become, he took charge of the sergeant's mess and that was me. So what that is you have this very tough ex-S.A.S. guy who knows all about drinks and service and getting sandwiches and coffee, because he had to learn it for the sergeant's mess. So there, and I told Chris that story, and he said I should have written it." In the holiday spirit, Michael Caine also shares a story about his Christmas present from Christopher Nolan. When Caine was first cast he joked with Nolan that he was worried he would have to say "dinner is served," and Nolan assured him he wouldn't have to say it. So last Christmas, Nolan sent Caine a dinner gong with the inscription "dinner is served."