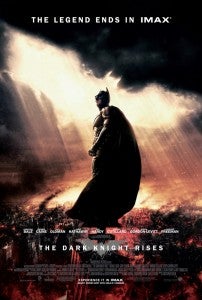 Not only did The Dark Knight Rises debut a new IMAX poster today (seen at right), but they also brought us a new TV spot...kind of. That's a thirty-second spot from Chinese television which focuses heavily on action, and specifically on The Bat, Batman's airborne vehicle that's going to be on every kid's Christmas list this year (except, presumably, in China where they don't have that sort of thing). It's mostly old footage, but there's a few seconds of fresh material around the end. Take a look at that poster, though; doesn't it seem a far more hopeful poster than we've seen before? All the others have been war and crashing and destruction and fire and nothing really screamed "rises" to me. Of course, you look at it another way and it looks as though he's died and is headed to Heaven, I suppose... The Dark Knight Rises is the third Batman film from director Christopher Nolan and stars Christian Bale, Michael Caine, Morgan Freeman and Gary Oldman. It will be in theaters July 20.