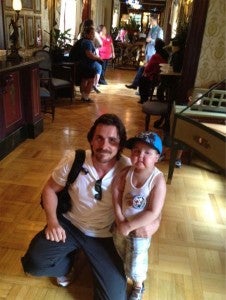 Last month, Comicbook.com reported on the story of how four year old cancer patient Jayden Barber dreamed of meeting his hero Batman. In order to grant Jayden's wish, the Youngstown, Ohio community rallied together to hold a special event for Jayden at a local stadium. Jayden got to meet a number of superheroes including Batman, and he was even treated to a ride in the Batmobile. However, there was also another mission for a Facebook group of over 30,000 members called Jayden's Warriors. The group wanted to arrange a meeting between Jayden and Christian Bale, who played Batman in Christopher Nolan's Batman trilogy. While Bale might have hung up his cape and cowl with The Dark Knight Rises, the actor rose to the occasion and proved to be a hero for young Jayden. Bale flew Jayden and his family out to California for lunch at Disney Club 33 on Wednesday of this past week. According to posts on Jayden's Warriors Facebook page, Christian Bale, his wife, and his daughter attended the lunch. Christian talked movies and superheroes with Jayden, and Jayden's mom posted, "Christian, his wife and daughter are three of the most beautiful people we have ever met! Christian made these arrangements for us personally and ensured we were treated like royalty." The even better news is that Jayden's family has posted that Jayden's cancer is currently in remission. Because Jayden has been in remission before and the cancer returned, the family is remaining cautiously optimistic.