Okay, so this is one of those articles that's self-evidently filled with spoilers, but we'll say it up top just to be on the safe side. There is no possible way that almost any aspect of The Dark Knight Rises will not be spoiled for you if you read on. Do so at your own risk. Alright, so that's out of the way. We were recently contacted by a journalist from another site, who explained to us that along the way, their site had essentially obtained confirmation from The Dark Knight Rises costume supervisor Lindy Hemming that the final scene in the Italian cafe was, in the comic book parlance, "Not a dream! Not an imaginary story!" And because that question--whether Bruce actually survived the explosion or whether that scene at the cafe was all just a dream on Alfred's part--has dogged us since the film's release, it seemed as good a time as any to present a somewhat more comprehensive argument as to why we think there's no real debate as to what happened there. We'll start with the obvious one... The costume designer says so. In an interview with Clothes on Film, Lindy Hemming told the site that there was quite a bit of thought that went into Bruce's and Selina's clothing at the cafe, as it was their one-and-only chance to really see these characters having moved on from the pasts  that haunted them. "[Selina Kyle] is now, like Bruce Wayne, living in the 'normal' world," Hemming said, "and should look like any other holidaymaker in Italy. To her (Anne Hathaway) and myself, that kind of blue signifies happiness and has good connotations." Having someone close to the film indicate that the filmmakers and actors perceived it as a definitive--if somewhat mysterious--scene is all we need to do to make it Word of God. The Bat's autopilot was fixed. This one's a pretty obvious one, but we leave it in here because some people have trumped this up into a bizarre controversy of its own. One of the differences between the Batman of the comic books and that of the Nolan films is that while his equipment might not be mass-produced, there are at least a handful of each of these things, given that Wayne Enterprises had to build them for their actual, legitimate business purposes before (in most cases) they were declined by the military and handed over to Bruce. Some people have said that there's a continuity problem, in that the final scene with Lucius Fox shows him poring over The Bat, hoping to see whether there's anything he could have done to save Batman. But there's no continuity problem--while it's true that the Bat could not have survived the explosion, that's clearly not the same Bat. Nolan is a pretty detail-oriented filmmaker, and if he had intended it to be the same one, there would have been some evidence of damage to the vehicle, which wasn't there. The fact that the fix was made by a software patch rather than by repairing or replacing hardware means that when Bruce figured out how to fix the autopilot, he applied it across the system in the same way you update your iPod or Nook. Which of course makes sense because someone as crazy prepared as Batman would know that there was an off chance he might one day need to use another Bat. Especially because the "six months ago" timeframe when the change was reportedly made would have put the repair before Bane's occupation and Bruce wouldn't have known that he was going to be retiring. 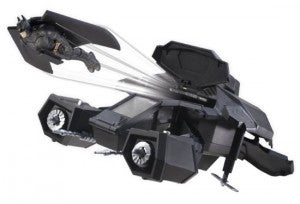 There was that toy, too... This is a kind of expansion on the autopilot idea, but ComicBook.com recently reported on a Dark Knight Rises toy that showed the Bat had an escape pod--which could be launched away from the main vehicle with Batman inside. If you needed some practical evidence that the filmmakers had a plan in place for exactly HOW the repaired autopilot could be used, that seems like the giveaway. The pearls were missing. Bruce's mother's pearls--something that both he and Selina had expressed desire throughout the film--disappeared from Wayne Manor at some point between when Bane attacked Bruce and when Batman returned. It seems unlikely that it was looted from the Manor, since he lives so far on the outskirts of town and there is no other evidence that Wayne Manor was ransacked during Bane's occupation. That means that after Bruce recovered the pearls from Selina, they remained at Wayne Manor until they were removed. He likely wouldn't have a ton of time for personal errands before taking the fight to Bane to disable the explosive device, so what seems more likely is that after Batman's apparent death but before normalcy is restored to Gotham and anyone can figure out that Bruce is missing (probably dead) and try to figure out what to do about that, he likely returned to the Manor to take a few things with him, and also... John Blake is Batman ...to set up the Cave. Someone needed to set up the "welcome kit" for incoming Batman Robin Blake, and Bruce is the only one who could have done it. The Cave is too high-security for anyone but he and Alfred to have set up all the things that were in place for Blake, and Alfred was well past the point of worrying about the future of the Batman franchise.