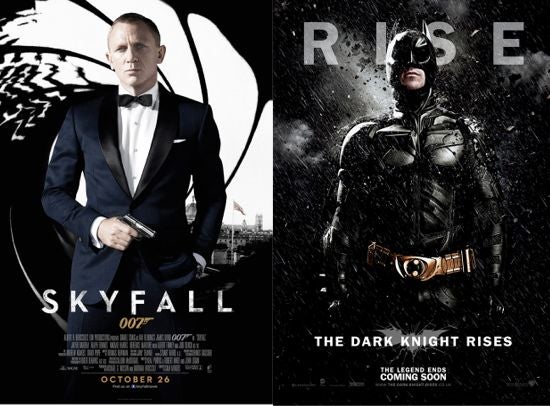 It was a tough call between using the headline we did or going with "Skyfall Rises About The Dark Knight Rises." It's great when movie titles have a way of just fitting right into news headlines. The Dark Knight Rises had been the #1 movie in the United Kingdom with a $90 million take at the British box office. Now, Batman will have to settle for second place to James Bond. Eon Productions, Metro-Goldwyn-Mayer Studios and Sony Pictures Entertainment have announced that Skyfall has now become the highest grossing movie of the year at the box office in the United Kingdom. Skyfall has taken in approximately $91.1 million in US dollars. The even more amazing thing about Skyfall's accomplishment is that the film reached its total in only just twelve days. Skyfall has also officially become the biggest James Bond movie of all time in the UK. "Skyfall continues to set records in the UK and all over the world and we could not be more proud of the film and its continued success," said Jeff Blake, who is Chairman of Sony Pictures Worldwide Marketing & Distribution. Skyfall is the twenty-third James Bond adventure. Skyfall will be released in the United States on November 9, 2012. While Skyfall will likely do well in the US, we expect that The Avengers and The Dark Knight Rises don't have to worry about losing their top two positions in the United States yearly box office. England might love their British spies, but America loves their superheroes.