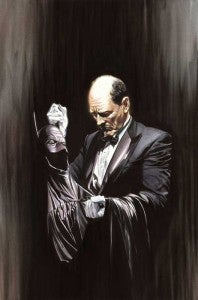 In spite of enthusiastic headlines around the Internet trumpeting that Christian Bale might come back as Batman for another go-'round, it appears that he'll only do so if director Christopher Nolan were to return with him--something that Nolan has made clear time and time again will not be happening. Meanwhile, there appear to be plans to get a DC Cinematic Universe rolling, including a rumored 2015 Batman film that will re-establish the character with a tone and worldview more conducive to putting him in the Justice League movie. That means it's time for one of reporters' and fans' favorite activities--pretending that we're casting agents in charge of deciding who will be the next Batman. With presumably no continuity to carry over from The Dark Knight Rises, the film should be a pretty clean slate, allowing us to cast whomever seems best without concern for whether they would fit into Nolan's universe. That said, we'd like to keep it limited to people who might have a shot at the role and so we're omitting people like Ben Affleck, who has the physique but whose sorry history with superheroes wouldn't do him any good; and anyone with major starring roles in existing Marvel franchises--or, really, any tentpole movie franchise that would be likely to keep them occupied for years and create scheduling conflicts (so, yeah, nobody from The Hunger Games or anything).

Michael C. Hall Most of you might know him as Dexter which, frankly, is enough reason to cast him as Batman. He's a tall, muscular, handsome man who has a proven ability to calmly and quietly scare the bejesus out of people. He's also right from a physical standpoint for matching up with existing DC heroes Ryan Reynolds (if he stays) and Henry Cavill, meaning that if and when the Justice League movie actually happens there wouldn't be anyone who was comically outsized or anything like that. 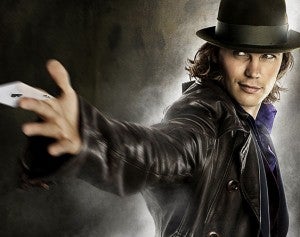 Taylor Kitsch It's time for this fan-favorite actor to live up to the hype and actually carry a franchise film before his career goes down with the sunken Battleship. With two collossal flops under his belt this year, it's hard to argue in favor of handing him another franchise--but the Batman and Justice League movies will make money no matter what (even Batman & Robin was profitable), so it allows us to consider talent, looks and longevity. Kitsch has all three. Longevity's an important factor here becuase, let's face it, if they want to build a DC movieverse, they would do well to keep the characters on the younger side. That said, Kitsch might be problematic only because he looks even younger than he is next to Henry Cavill, and it seems likely that one way or another, Batman and Superman will be understood to be within a few years' age of one another.

Ryan Gosling One might think that casting "that dude from The Notebook" would be suicide for a Bat film, but those people clearly haven't seen Drive. He's a master of the slow-burn, whether that's building to a profound emotional moment or just an explosion of anger, and would "feel" quite a bit like Christian Bale, honestly--which of course is both good and bad. The star is also working on building up some action and genre-movie street cred, not only with the much-anticipated remake of Logan's Run in production but with Gangster Squad, coming out later this year from Will Beall. Does that name sound familiar? Oh, yeah--he's writing Justice League.

Gerard Butler Assuming he could tone down the accent, he's got the intensity and humor to play the role. He may actually be a little old for the role, given the people he'd be standing around, although frankly he looks pretty good next to Cavill in our heads. His existing relationship with Warner Brothers, DC Entertainment and Man of Steel director Zack Snyder (he starred in 300 and the animated Watchmen movie for the filmmaker) should work to his advantage...as long as he doesn't mention that whole Watchmen part too loudly.

Zachary Levi A fan-favorite among nerds of all stripes, the Chuck star would make an intriguing choice for Batman. He's done stunts before and can carry the drama well, but everything he's ever done has had its tongue firmly in cheek. Would it work for Batman? We think it could. It would depend heavily on the script, more likely than not...but a Batman with a little more humanity probably would work well for an ensemble piece like Justice League. He wouldn't really even need to bulk up for the part; while most fans probably think of him as the skinny geek from the early seasons of Chuck, later seasons required him to do a lot more fighting and "spy stuff," and the actor had to bulk up for that role. He still looks pretty superheroic and, in fact, has already taken down Superman a couple of times; Brandon Routh, who starred in Scott Pilgrim vs. The World and Superman Returns, was a recurring villain on Chuck.

The Dark Knight Rises: Five Actors That Could Play Batman Next