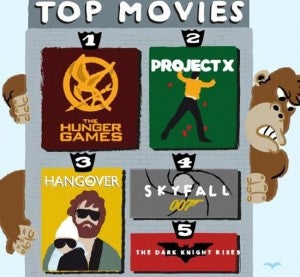 recently took a look at some data in regards to movies for their 25 million members. It turns out that one comic book movie was in the top five must stumbled upon movies of 2012. The Dark Knight Rises was the fifth must stumbled upon movie of 2012. Hunger Games took the top spot, followed by Project X at number two, Hangover at number three, and Skyfall at number four. At the box office, The Dark Knight Rises was the second highest grossing movie of 2012. The Avengers, which was the highest grossing movie of 2012, surprisingly did not make the stumbled upon top five list. Check out the full infographic on the StumbleUpon blog, which also lists the top five most stumbled upon TV shows. Game of Thrones finished in the fourth position, but The Walking Dead surprisingly does not make the list.