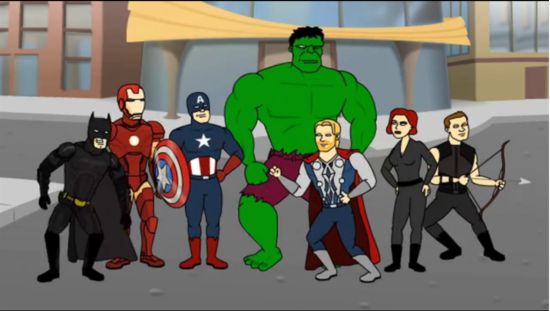 With Disney re-releasing The Avengers in theaters over Labor Day weekend to go head-to-head with fellow superhero movie The Dark Knight Rises, this parody video from College Humor seems very timely. In the The Dark Knight Meets The Avenger, the two biggest movies of 2012 come together in one epic funny video. While The Avengers are all happy to celebrate their victory over the forces of evil, Batman reminds them, "We may have won here and now, but evil will surface again, and when it does, we'll be there waiting, watching, reckoning, a silent guardian, a Dark Knight rises." When The Avengers invite Batman to grab a beer, he tells them that he prefers to sit alone in a cave and think about his dead parents. When Captain America whispers to Batman about the power of friendship, Batman snaps, "I don't need friends. I work alone." However, Batman finally comes around and wants to join The Avengers' pool party, but will his change of heart be too late?