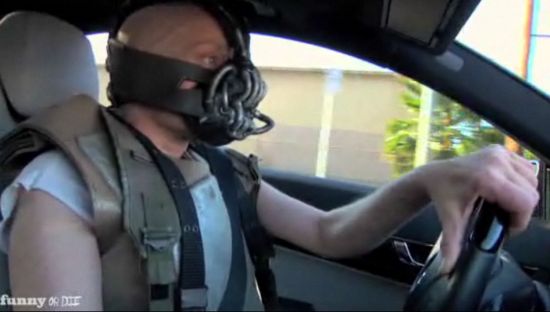 And The Dark Knight Rises parody videos just keep coming. Joining "Batman Maybe" and "Bane Vs. Cable Guys" is "Bane After Batman." This new Dark Knight Rises parody video comes way of Funny Or Die. Just like a common theme with The Avengers parody videos seemed to be presenting the team as a boy band, a common theme of turning Bane into a little bit of a whiner seems to be developing with Dark Knight Rises parody videos. This Funny Or Die segment stars Chris Kattan of Saturday Night Live fame as Bane. It is set seven years after the events of The Dark Knight Rises, and Bane has been released back into the Gotham community as part of a fresh start program. Apparently, the penalty for attempting to blow up a city with a nuclear bomb isn't that severe in Gotham City. However, Bane has been ordered to complete 275,000 hours of community service and take anger management classes. Bane is attempting to adjust to normal life by taking flute lessons and trying online dating, even though he sometimes misses "ripping out people's throats and threatening the world with a nuclear bomb."

0commentsBane After Batman with Chris Kattan