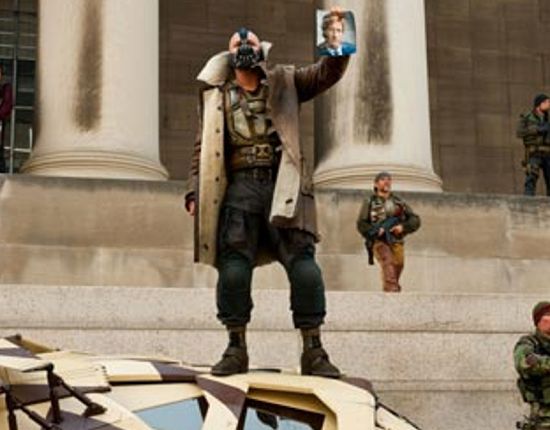 While press reviews might be embargoed, talk show hosts and celebrities have no problem offering up what they think of The Dark Knight Rises. All week long, Comicbook.com has been bringing you the best Dark Knight Rises reviews, as the Dark Knight Rises cast visits with various talk show hosts. Now, here is a roundup of all the reviews. David Letterman on The Late Show – "What a deal this thing is. Well, you know what, I'll tell you in all honesty. I went to the movie, and it's two hours and forty-five minutes. So two hours and forty-five minutes, that says bring survival gear, and I went in there, and the thing flies by. I was amazed at how quickly it goes by, and that's the sign of a great movie." Seth Myers on Live with Kelly – "It was great. I love it. It's really exciting, and everybody should see it." Morgan Freeman on the Tonight Show With Jay Leno – "This one, we thought we've been talking about this and saying, 'he couldn't possible, talking about Chris Nolan, he couldn't possible top himself after Dark Knight.' He did it. Yeah, this one was one of the most fantastic movies I ever saw." Jimmy Kimmel on Jimmy Kimmel Live! – "It was pretty much the highlight of my year, I have to admit. I was so excited. It came out great." Jimmy Fallon on Late Night With Jimmy Fallon - "I saw the Dark Knight Rises. Wow! It is awesome. I think legally I'm not allowed to say anything about the movie." Fallon added, "I almost got a headache just thinking about scheduling this movie or directing this movie. It's just intense, action-packed. It's like it's just such a fun movie." Combine these celebrity and talk show host reviews with the Dark Knight Rises twitter reviews that have emerged and things are definitely looking good that Dark Knight Rises will be an epic movie. The Dark Knight Rises is scheduled to premiere in theaters on Friday, July 20, 2012.