Let's cut right to the chase here: with his final Batman film hitting cinemas in July, Man of Steel coming next June and a Justice League movie currently being written, should director Christopher Nolan set up the meeting of the World's Finest superheroes in The Dark Knight Rises? Every time the rumor resurfaces--or is even mentioned--there are passionate fans on both sides of the issue, and it seemed worth taking a little time to consider in and of itself. On the one hand, you have the integrity of Nolan's artistic vision; he's said before that he doesn't really want to put the two characters together in a film, because he feels that not only is each character strong enough to stand on his own merits, but that the headspace where each of them operates at his respective best is different enough from the other that Superman wouldn't really fit in the best Batman movie Nolan could make. On the other hand, you've got cold, hard financial reality. Warner wants to make a Justice League movie, which means that not only will these characters meet onscreen sooner than later, but Marvel's extremely successful moviemaking model has been to connect the movies through small cameos, subtle connections and the occasional outright crossover. Whether Nolan thinks the pair "fit" together or not, they're going to BE together, and it seems like a real missed opportunity not to start the new DC Universe in what will likely be the most successful Warner Brothers superhero movie to date. So, should Superman appear in The Dark Knight Rises? The answer is no. Nolan's making the third film in a trilogy, and Man of Steel is a whole other thing, even with Nolan being involved. The artistic integrity of Nolan's trilogy should be protected, and for those who think that's fiscally irresponsible or a disservice to the fledgling DC Cinematic Universe, remember that with Nolan leaving, Christian Bale and Gary Oldman will be following him out the door. More likely than not, Michael Caine and Morgan Freeman, too. If a DC Universe were teased in The Dark Knight Rises, only to have the Nolan Batverse effectively end after this movie, it would make the eventual interconnected movies all the more awkward. For that reason alone, there's no reason to inject story elements into a beloved and critically-acclaimed trilogy. Another thing: Just because Superman doesn't appear, doesn't inherently mean they can't plant the seeds for the DC Universe. At the end of Iron Man, what was it we saw? Not Thor, which would be the equivalent of Superman showing up in a Batman movie. No, we were introduced to S.H.I.E.L.D. While there's a good chance Superman's outright appearance would yank people out of the gritty reality of The Dark Knight Rises, that's not to say we can't see someone a little more grounded in reality this time out. 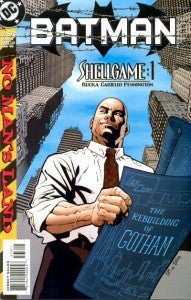 Like, say...Lex Luthor? We've talked about it before, but in No Man's Land, the Batman mega-crossover that The Dark Knight Rises seems to be at least partially based on (what with the earthquakes and the detonated bridges and all), it was Lex Luthor, not Bruce Wayne, who first swooped in and poured money into Gotham, revitalizing a city that was well past the brink and positioning himself to "run" a city that didn't have the liability of a Superman to stop whatever he had in store next. It was, ultimately, an unsuccessful attempt as Bruce Wayne proved he had both more money and more foresight than Luthor, but the white collar criminal played a small but key role in the rebuilding of the city after natural disasters and supervillains laid waste to the joint. If Warner Brothers was determined that there ought to be a connection to Man of Steel, Nolan could easily do it using Lex--a corporate crook with political aspirations--and not a strange visitor from another planet, who admittedly would fit into Nolan's Batman films like a square peg into a round hole. Here's another point: just because Superman or some other DC character doesn't appear in The Dark Knight Rises, absolutely doesn't mean there wouldn't be a plan in place to build a DC Universe. Man of Steel, afte rall, is due in theaters on June 14, 2013--that's less than a year away at this point. Not only would Superman be more suited to having a "guest" in his movie (you could even use Green Lantern if you wanted to), but it would retain an essential part of DC's publishing plan for The New 52: restoring Superman as "the first superhero." The fact that Batman has been seen operating in public during the course of Nolan's Dark Knight Trilogy means it would be near-impossible to pitch Superman as having been around this whole time and nobody having mentioned it, and so Batman would have been the first costumed vigilante seen in public. Introducing a new character--Batman or anyone else--at the end of Man of Steel would mean acknowledging a shared DC Universe as part of a near-future business plan without compromising the "vision" of the Nolanverse or the idea of Superman as the first and the inspiration for all who came after him. That's the smart play.

The Dark Knight Rises: Should He Or Shouldn't He?