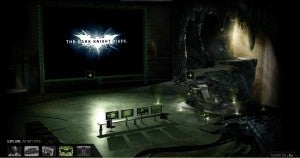 The Batcave is now open for business on the Mtn. Dew "Dew Gotham City" website, so expect to be reading some more Dark Knight Rises spoilers over the next few days as Comic-Con International descends on San Diego. While Christopher Nolan and company won't be coming to the show, they've got a world premiere to think about on Monday and so it's inevitable that the forthcoming third and final film in the director's Dark Knight Trilogy will be a hot topic of conversation during this week when comics are on the minds and lips of everyone. The Bat Cave was set to be unlocked today, although it could have gone live earlier had fans entered enough codes for the Batman-branded exclusive Mountain Dew Dark Berry. Frankly, it seemed unlikely from the get-go and the last time I checked--a week or so ago--the counter still said that 0% of the necessary codes had been entered. That seems unlikely to be correct, but in any case, the Cave is open now and...well, loading slowly. As with the first days of the site itself being open, there are likely hundreds of thousands or more users flocking to the Bat Cave to see what secrets it might unlock about the forthcoming film. It took us a few minutes to get in, and even then it plodded along--but there's plenty to do and see in the Cave. Clicking on the main monitor in the room, whichbears the movie's logo, you're kicked into a video interview with director Christopher Nolan. "At the beginning of The Dark Knight Rises, we are dealing with a Gotham that does not need Batman," the director says, "but he is frozen in this moment in time." There are images from the film, too, including a shot of Christian Bale as Bruce Wayne looking downright pathetic. The combination of behind-the-scenes footage and audio-video from the film doesn't tell us too much new that's concrete, but gives us slightly more in the way of details with regard to Bruce Wayne's state of mind as the film begins and what Batman and Alfred know about Bane. There's also a 360-degree look at The Bat Pod--and one for The Bat and its features that puts what little we already saw in the Applied Sciences office to shame, and plenty more places that look like they're just begging to be clicked in the coming days for more information, so keep your eyes on ComicBook.com and we'll keep you abreast of new content and developments.

The Dark Knight Rises: The Bat Cave is Open