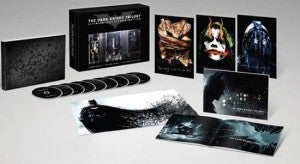 A new documentary attached to The Dark Knight Trilogy Ultimate Collector's Edition--in stores now in a limited run of less than 150,000--focuses heavily on one idea that has been key to the widespread acceptance of the Christopher Nolan-directed films by the Hollywood establishment: The fact that they're objectively good films from a technical, performance and writing standpoint and transcend the expectations of a popcorn action movie. In the beginning, various different people including Emma Thomas (Nolan's co-producer and spouse) say in the documentary, Nolan met with dozens of potential Batmans, and many of them were reluctant to sign on for a superhero film. Of course, there wasn't anything quite like the Dark Knight Trilogy at that point, and even the Marvel Studios films hadn't got to where they are now--but it's one of a number of film critics interviewed in the documentary who says it best: leaving the theater after Batman Begins, it wasn't that it was a great superhero movie or a great action movie; he and many other critical viewers left thinking that it was a great film. 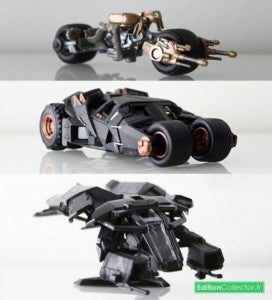 That, in fact, is most of the focus of the box set; the discussion between Christopher Nolan and Superman: The Movie director Richard Donner touches on the responsibility of handing icons or "American myths," as Donner calls Superman, but most of the conversation centers around the nitty-gritty of filmmaking; the special effects, the philosophy, the music. There's also a letter from Christopher Nolan and, while it's fairly shallow since it's only a page long and is intended to serve as an introduction to the epic trilogy and the massive box set, that too focuses on the idea of having a "vision" for the film. That's really the thing that gets communicated, from The Fire Rises documentary to the special features and even taking a short cruise back through the documentaries and specials that appeared on the previous movies' Blu-ray editions: It's all about making the best film possible. They dismiss the idea of "popcorn" superhero movies, in fact, and talk about things like the notion that Heath Ledger's Oscar-winning turn as The Joker won't just be in the discussion about comic book movies for the rest of time but will be considered one of the great triumphs of cinema; it was an historic performance by a great actor who was, nevertheless, not immediately embraced by the fans, the studio--anyone. It was basically Nolan saying, "Hey, look, we can swing this." And for Ledger's part--he, too, understood by then that he was going to be doing a great film under Nolan. Not unlike what Mark Wahlberg recently said about Star Trek, Ledger came in to audition for Batman and said, basically, that he would love to work with Nolan but that he couldn't see himself in a superhero movie. Three years later, he's back in the same interview chair and he's embracing the idea of playing The Joker when, according to producers, a number of other actors wanted no part of it, intimidated as they were by Jack Nicholson's performance. 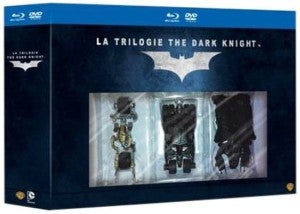 Some of the giants of genre filmmaking are on hand to praise Nolan's work, too, and it gives a sense for how the Dark Knight Trilogy is seen in Hollywood. Pacific Rim director Guillermo del Toro is one of the most effusive, enthusiastic and frequent voices on the box set, and legendary filmmaker Michael Mann joins in the chorus of approval, too. That so much time is spent delving into the technical aspects of the films is fascinating--and it helps the box set stand the test of time. We're in a golden age of superhero movies, after all, and nobody was fooling themselves that Warner Bros. would leave Batman on the shelf for long. You can see when the special features were filmed if you pay very close attention; there are references made to Pacific Rim in the past tense, but Jeff Robinov, the former head of motion pictures for Warner who helped cultivate the studio's relationship with Nolan, is still credited as being current in that job.  At that point, then, Warner Bros. already knew--but nobody else did--that there was a Batman vs. Superman movie set to be announced between the time when the interviews were conducted and when the box set was released. Wisely, they avoided the temptation, then, to talk at length about what made this version of the character special, electing to focus on the films themselves. This was the first time with any major superhero property that a studio handed the keys over to a director and says, "Hey, look--you've got a vision we believe in, and we want to see you film it. And we'll give you nearly a billion dollars and three movies to do so, as long as you deliver." And deliver, Nolan did. The box set delivers, too; in addition to giving us a warm, fuzzy feeling about the state of comic book movies that's the polar opposite of the kind of generalized bashing we saw this morning from The Avengers star Scarlett Johansson, the whole package--with its focus on the craft, the artistry and the experience of the films--feels every bit like a Criterion Collection Blu-ray. The art prints from Mondo, immortalizing the villains of the trilogy, and the nicer-than-toy-aisle replicas of the Tumbler, the Batpod and the Bat, all do the job of communicating that Warners takes this trilogy every bit as seriously as MGM took A Fistful of Dollars, For a Few Dollars More and The Good, The Bad and the Ugly when they recently reissued those films with lobby cards, documentaries and remastered sound. We'll have a few more write-ups on this box set in the next couple of days.