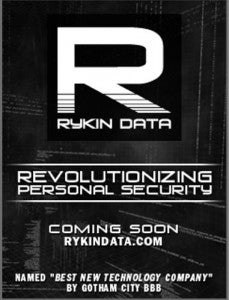 Another day, another new twist revealed for The Dark Knight Rises. Mountain Dew's DewGothamCity.com website has published three pages for The Gotham Observer. Most of what is in the paper covers information already known about The Dark Knight Rises. There are articles about Harvey Dent Day, a slew of burglaries plaguing the city, Zach Harris re-signing with the Rogues, the public library being renamed, and a construction site being ransacked. There is also a horoscope section with a rather interesting advertisement beside it. The advertisement is for a company called Rykin Data. The tag line for Rykin Data is "Revolutionizing Personal Security." It is also promoted that Ryken Data has been "named best new technology company by Gotham City BBB." And there is even a web address: RykinData.com. The website says it is still under development, but it also contains a United States Patent application. The abstract for the patent application says, "Personal histories organized by names, dates of birth, credit card numbers, driver's license numbers, bank account numbers, and social security numbers have a cyber immortality given the ease at which information can be transmitted and stored on databases. In response to growth of efficient Digital Information Retrieval (D.I.R.) programs by which one's personal history can be accessed without one's knowledge of approval, Rykin Data has developed the methods in which a software-based application can source the total sum of one's personal information archived on all databases and permanently purge this data, effectively granting the subject a clean slate within the digital world." 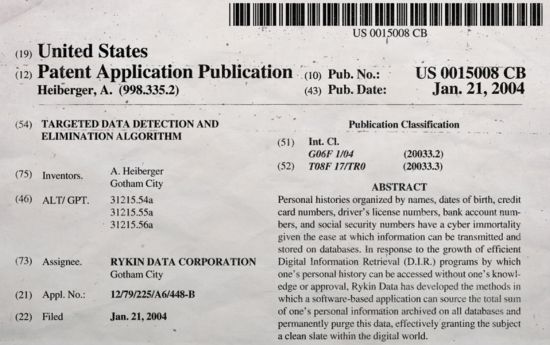 So it sounds like Rykin Data has created a way to wipe someone's information from all databases. How will Rykin Data play into The Dark Knight Rises plot?