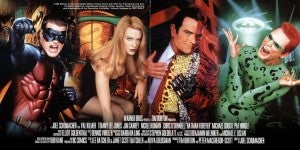 With today's release of The Dark Knight Rises and The Dark Knight Trilogy on DVD, Blu-ray and digital download, it seems like (once again) everybody's talking about Batman. Even somebody who, frankly, most fans think probably should never utter the name again: Joel Schumacher. The director of Batman Forever and Batman & Robin, Schumacher is one of the most loathed men in the world among Bat-fans, but during an interview with ComingSoon.net, he was asked his opinion of the Nolan films. He didn't really give an opinion, but instead seemed to contextualize his own films, and then Nolan's: "I think what's very interesting about Batman and how brilliant Chris Nolan is, if you look at the last Batman, ours were at a much simpler time. Our job  was to entertain the whole family. To make it fun and sell a lot of toys. It was  a franchise," Schumacher explained. "The last one is really about what we're going through, the  extraordinary gap between the haves and the have-nots... I think right now the  last Batman is very reflective of the times we're living in, which are scary  times. I'm not a predictor of revolutions and I don't think there will be one in  the United States, but there are the seeds of it. When you have too many poor  and too many rich, those are the seeds of revolution." Certainly it doesn't give the short shrift to Nolan, whom he calls "brilliant," but it seems to suggest that his own films were less the failures they're remembered as and more a product of the time and context. That's perhaps being overly generous. Then again, Brett Ratner feels the same way about X-Men: The Last Stand. Apparently some filmmakers take the old advice not to listen to your critics a little too seriously...!