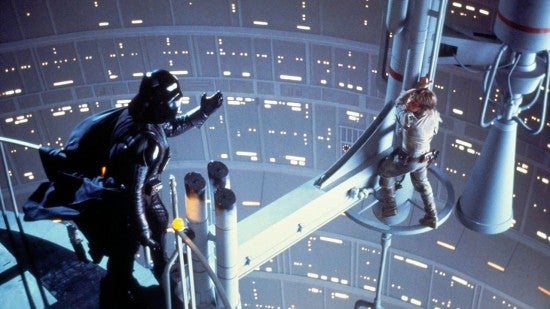 As they did not long ago with the trailer for Star Wars, Lucasfilm have released the original theatrical trailer for The Empire Strikes Back to their YouTube Channel today, a move many are assuming is teasing a major Star Wars Episode VII announcement coming soon. The trailer is embedded below, along with the original commentary provided by Lucasfilm on YouTube. They cite Ralph McQuarrie particularly; do you think they'll go back to some of his designs for the sequels? There are plenty of McQuarrie designs hanging around that never made it--or at least never made it in their original form--to the big screen, so if Abrams wanted to retain as much of the original "look" as possible, it might be a nice touch to incorporate some of that.

Watch the original teaser trailer for The Empire Strikes Back, which is notable for featuring solely concept art by Ralph McQuarrie but no film footage. Among the McQuarrie paintings seen are the Rebel hangar on Hoth, Luke on a tauntaun, Darth Vader aboard a Star Destroyer, Cloud City, an Imperial probe droid, and Luke's final duel with Darth Vader.

The Empire Strikes Back Trailer Re-Released by Lucasfilm