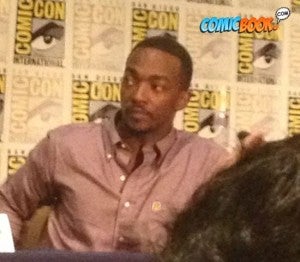 With Ben Affleck finally speaking out on the backlash over his casting as Batman, it seems to have generated a whole new round of celebrities offering words of encouragement. Yesterday, even Donald Trump weighed in with his advice that everyone should calm down over Ben Affleck being Batman. Now, Anthony Mackie, who plays the Falcon in the upcoming Captain America: The Winter Soldier, has weighed in with his opinion. While Mackie offering an opinion might at first seem kind of random, it makes sense because he's currently promoting Runner, Runner, a movie he appears in with Ben Affleck. Mackie's comments are also interesting for another reason. While much of the uproar over Ben Affleck's casting came from fans who wanted Christian Bale back, Mackie actually picks Michael Keaton as his favorite Batman. He even suggests that Affleck will make Batman cool again, as if he maybe wasn't cool when Bale was playing him. In an interview with EOnline, Mackie said, "I think it's great. My favorite Batman was Michael Keaton because he made Batman like an everyday guy we can relate to. I feel like the last few [actors playing] Batman have been lost in trepidation that you really can't relate to. So I feel like Ben Affleck—what makes him a star is he has that everyman quality. I feel like he is going to bring that back to Batman and make him cool again."