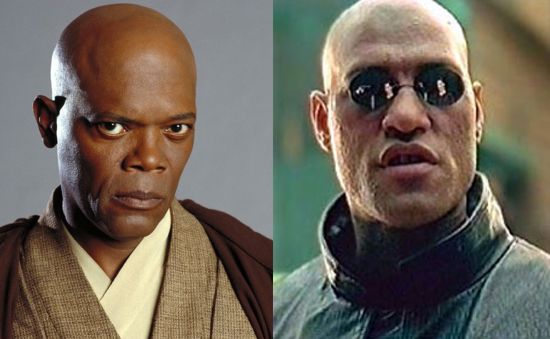 Earlier today, a video went viral, which showed an entertainment news reporter asking Samuel L. Jackson about his Super Bowl commercial. However, Jackson didn't star in a Super Bowl commercial, and Jackson quickly realized the reporter was probably referencing Laurence Fishburne's Kia commercial. Jackson went off on the reporter telling him, "You're as crazy as the people on Twitter. I'm not Laurence Fishburne! We don't all look alike…You're the entertainment reporter for this station? And you don't know the difference between me and Laurence Fishburne? That must be a very short line for your job outside there." However, a reader tipped us that this isn't the first time that Samuel L. Jackson has been mistaken for Laurence Fishburne. In the fifth episode of the British sitcom Extras, Jackson appeared as himself. Extras was about extras working on television and movie sets. Ashley Jensen's character Maggie Jacobs told Jackson, "I don't normally watch films more than once, but I thought The Matrix, I loved it...amazing, and you were brilliant in it." Then, Jackson politely told Maggie, "I wasn't in that one." However, Maggie argued with him, insisting that he was. Of course, in this instance, it was all part of a joke for the show, so it's understandable that Jackson got slightly more upset when it actually happened for real in real life. Check out a YouTube clip of the segment below.

The First Time Samuel L. Jackson Was Mistaken For Laurence Fishburne On Extras