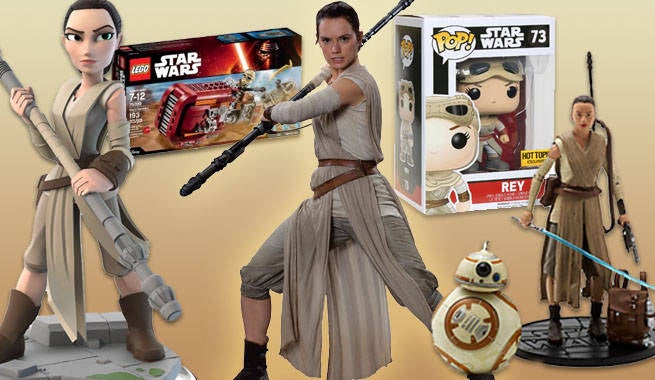 Rey is undoubtedly the star of Star Wars: The Force Awakens. This fact is making many wonder, "Where's Rey?" when it comes to the toy lines and other Star Wars products.

Rey may have been kept from certain Star Wars products for purposes of keeping moviegoers spoiler free or other reasons unknown to fans, but do you realize just how many Star Wars products are available? More than 50% of the aisles at Wal Mart have some sort of Star Wars logo on a random product. Star Wars window cleaner. Star Wars car mats. Star Wars dog beds.

In other words, there's still plenty of Rey to go around.

Let's take a look at our five favorite Star Wars products which either focus on or feature Daisy Ridley's Rey.

The Rey's Speeder LEGO set features the Rey we meet early in The Force Awakens. She's the innocent young girl trying to survive on Jakku but when we see what she's capable of, it makes this set even better!

Not only does she come with one of Ankar's thugs but her staff is included so we can beat him up over and over again! On top of that, her blue goggles and garb to cover her head while she is out scavenging for parts are also included as an interchangeable headpiece.

Another, different Rey minifigure is also included in the epic 1300+ piece Millenium Falcon, too.

One of the higher quality Rey figures comes from the Star Wars Elite Series and it isn't afraid of spoilers.

It includes an awesome BB-8 and lots of accessories for Rey to get out scavenge. Most importantly, though, it comes with the famous blue lightsaber which we know belongs to Luke Skywalker, in addition to Rey's staff and the gun which Han gave to her in Episode VII.

This is actually the second edition of Rey in the Elite Series - the first, released on Force Friday, didn't include that Anakin/Luke lightsaber, naturally. It's hard to find, sold out at a lot of Disney Stores (so is the released-upon-movie-release No-Mask Kylo Ren), so if you see it, grab it.

Having seen The Force Awakens, each accessory included with this figure has an added value. Not to mention, Rey is awesome. 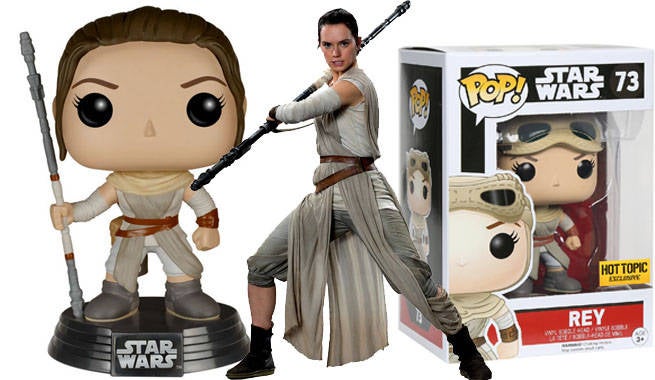 Rey got the Funko POP! treatment not once, but twice.

One of the Rey figures, featured on the left in the photo above, is available at most retailers. The figure on the right which has Rey's blue goggles seen in the Episode VII trailer and early in the film itself is a Hot Topic exclusive.

Why not get a nearly complete collection of all of Star Wars: The Force Awakens' new characters?

A six figure set includes the new good guys and the new bad guys: Rey, Finn, BB-8, Kylo Ren, Captain Phasma, and the new Flametrooper seen throughout Episode VII. These small figures can be used in your Star Wars Monopoly set, which only included four figures to represent seven movies.

What better way to celebrate your love for Rey than to actually be her? I'm not talking costumes (which are also available), I'm talking about the Disney Infinity video game.

A Disney Infinity Star Wars two-pack includes Rey and Finn, the two biggest newcomers to the Star Wars franchise, along with a new play set that retells the story of The Force Awakens with an all-ages flair. The best part of Disney Infinity is that with the fun gameplay you get out of the purchase, you also get a collectible figure to have on the shelf when you're not playing. And we all love collectibles on our shelves.