It's Halloween, so what better day to consider the merits of a movie that features violence, zombies, and the occasional knife to the eye? That's right, folks--Eric Powell's beloved Dark Horse Comics series The Goon is still winding its way toward the big screen, and the most recent step in that journey is that they've launched a Kickstarter campaign aimed at raising $400,000 to provide Hollywood studios with a test reel--rudimentary animation, music and sound effects. This will make selling the film to a potential backer much easier, which is necessary becuase the actual budget for an animated feature film, especially one that matches up, quality-wise, with what Blur have offered in the trailer and sample scene that's been floating around the Internet for a while, costs substantially more than you can easily raise on Kickstarter. Not that even this much is "easy." But Fight Club and The Social Network director David Fincher is attached to the film, which helps open a lot of doors. The folks at Blur are pretty convinced that this story reel could be the missing piece to interesting a studio. Plus, now everyone can stop asking Eric Powell why they don't just fund the thing with Kickstarter. Blur's Tim Miller and Jeff Fowler joined us to talk about the film, the fundraising campaign, and the challenges they've faced along the way. But first, of course, check out the trailer to get a sense for what we're talking about. There's a ton more to this conversation, too, but we're making strategic cuts, here. We're going to run it by Blur, and if they're down, you'll get a full, in-depth recording of the conversation on an episode of Panel Discussions Friday morning. 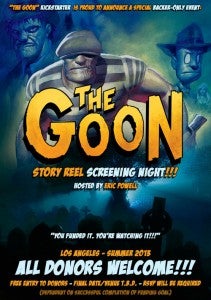 Russ Burlingame: How long have you two gentlemen in particular been involved with this project? Tim Miller: I think we started reading the comic from day one. The film, though, didn't come around until three years ago. Jeff Fowler: I think we auctioned it a little earlier. Maybe 2008 or 2009-ish is when we made the initial contact with Eric and brought him out here and got together with David Fincher and talked about making this into a feature film. RB: It's played out in a very public way, because people liked the animation and so it's been passed around on the Internet, but is the way you guys did this kind of standard operating procedure or was it a special case that you made this short piece of finished animation as a pitch? TM: I can't think of anybody--doing animation at that level is fairly expensive and time-consuming and I haven't seen any other studios do an animation test directly to pitch a film. I'm sure it's been done, but I've never seen it. I've seen shorts that sometimes people do for the love of it and then they get turned into films but I've never seen anybody do quite this. JF: And the other difference is, with a lot of the other animation studios, they have a parent company that they're run by so they're not necessarily shopping their projects around. If you look at Blue Sky they're owned by 20th Century Fox. Obviously Pixar is owned by Disney, Dreamworks is its own thing. So you don't have an animation studio in that position where they create a proof of concept and then have to follow it up by shopping it around to studios. Everyone's kind of already in bed with somebody. One thing we knew is [the animation test] was going to be important to marshal fan support and it wasn't just going to be a case of making this great proof of concept piece and walking into a studio and having them immediately sign on. We figured it would be a good idea to get the fans on board and make some noise, so that was kind of the approach from the start. TM: Blur has had a troubled path to making feature films because the stuff we're really interested in is more edgy and outside-the-box than talking animal films. Jeff is probably a little closer to the Disney ideal than I am, for sure, but since I started the studio I never wanted to do just your average film and compete with Pixar. As much as I respect their work, it's just not my interest. Over the eighteen years at Blur, I've assembled a group of like-minded people and nobody's really all that interested in doing cutesy sh--.

RB: In a lot of ways, that business model sits well with David Fincher--he's a dude who has probably done something at some point in his life that wasn't R-rated, but I can't remember what it might be. TM: David would definitely not be involved in anything that was really light in tone. He's just--I don't think he has disdain for it, he's just not interested in it, in the same way that I'm not interested as much. I'm a big fan of animation so I love the Pixar stuff and that's true but really as a storyteller, I really want something a little edgier and more adult and so that's the kind of stuff we go after. JF: It's unfortunate that it costs as much as it does to make these films--animated films in particular. That's where the unwillingness to take risks comes in with the studios. It would be one thing if it was a $10 million film; we'd definitely be given a little more latitude to do something a little different but it's just prohibitively expensive. RB: Well, and that's where the Kickstarter is supposed to be helpful, right? Have you had any problems with people who don't understand why you or Fincher can't pay for this? TM: I think part of it is just the mechanics of the way money works. For instance, you might have Ben Affleck or Tom Cruise or somebody option a property, but usually they're doing it with a studio partner who pays for that option. They aren't going out of pocket themselves to fund this sort of thing and if they do, there's a limit to it. You don't just pour millions of your own money into a project if you're not sure that it's going to go. I see a recurring thing here in Hollywood where increasingly things are developed outside the studio and they're taken in as a package. A producer outside of the studio will get a script together, option a property, hire or attach actors, and then bring it all into the studio sort of pre-packaged. That's the model we've been doing with this stuff, less because that's what the studio wants and more because that's the way we get the most creative control, because we're putting our stamp on it right from the start. But anyway, David and I optioned the script, which cost money; we paid Eric to write the script, which cost money; and then we did this big animation test, which cost money. I think other people discount, too, the amount of time that it takes, and time is money. But anyway, that idea that David hasn't put in his own money is false. He has, and we have--but it didn't work. David never gives up, so the path would be, had we not done the Kickstarter, we would just keep taking meetings until hopefully we found the right thing. We wouldn't put a whole lot more money in it but we would keep putting time in it. Once you've done the rounds with your regular stuff you can't put money in it forever; we're not rich, and it's just not the way that the process works to just keep putting money in it. But we have put a lot of money in it, probably more than most people have, based on the way Hollywood works. We get this rap because of David, and I almost wonder if it would be easier for Kickstarter if he wasn't prominently mentioned but he really is a huge help. Just him being attached is gift enough, but it just so happens that he's given money, too.

The Goon Movie: The Case For Kickstarter With Blur Studios