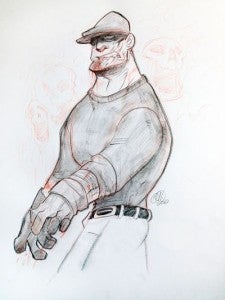 When last Comicbook.com reported on The Goon movie, Blur Studios had raised $400,000 via Kickstarter to create a story reel to pitch the movie to other financial backers. To actually complete The Goon animated movie will cost around $35 million, but the story reel is an important first step in helping to prove the concept to potential financers. Earlier today, The Goon creator Eric Powell posted an update to Facebook. Powell wrote, "Goon Film Story Reel Update: The first storyboard artist has been hired and is at work I'm told!" Haylee Herrick is the storyboard artist who has been hired, as she posted about landing the gig on her blog. Herrick wrote, "Guess whaaat everybody??? A dream has come true! After much anticipation, I can officially announce that I will be working on Eric Powell's, The Goon as a development and story artist. Reality has yet to sink in, and then my mind will probably explode from the awesomeness of this opportunity. There is going to be so much to learn, new people to befriend, and amazing badassery to be done!" Haylee Herrick also posted some artwork of The Goon to her blog to commemorate the opportunity.