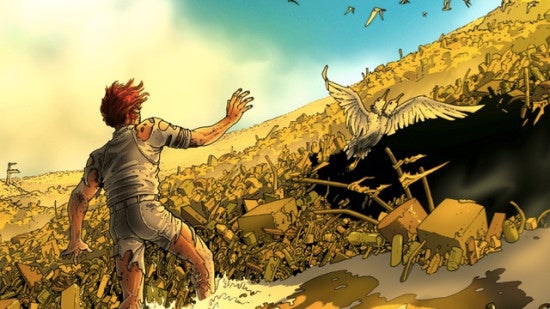 Fans of comic book writer Joe Harris will remember that, not long ago, he gave fans on Facebook a heads-up when his creator-owned comic book series Ghost Projekt had been bought up for TV. Without saying as much, he urged fans to "like" the Ghost Projekt Facebook page for details on something big coming up, which many paired with comments he'd made about a film/TV project and concluded that the two were one and the same. About a week later, the official announcement came. Now, he seems to be implying that The Great Pacific, his Image Comics series, might be headed for an other-media adaptation, as well. In response to a review headline that read, "You Can't Get This at the Movies or on Television," Harris posted the article to his Facebook page with the cryptic comment "Oh...I think this is possible in movies and television too. But maybe I'm an optimist, with secret information." Could Harris be working to develop the series for film? Well, he did recently say he's going to be shooting a film project.