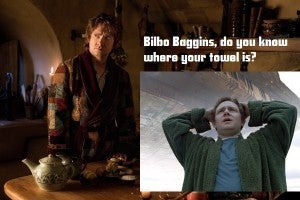 Boy, Martin Freeman sure does like dressing gowns, doesn't he? We're sharing this only for our own amusement, but Freeman - who also starred in the original version of The Office and currently appears as John Watson in Sherlock - played Arthur Dent, the hero of The Hitchhiker's Guide to the Galaxy and a character who spent the entire film (and, in the case of the novels it's based on, three entire books and change) wearing the same filthy dressing gown he wore the day the world was destroyed by an alien construction crew (inset). When we saw the shot of Bilbo Baggins wearing a dressing gown in The Hobbit: An Unexpected Journey, we just wanted to present the actor with this simple question. The Hobbit: An Unexpected Journey, the first in a trilogy of films adapting J.R.R. Tolkien's epic fantasy novel The Hobbit, will hit theaters on December 14.

The Hitchhiker's Guide to Middle Earth