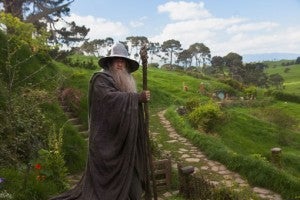 Sir Ian McKellen almost didn't return for Peter Jackson's three-film adaptation of J.R.R. Tolkien's The Hobbit, according to The Hollywood Reporter (via CBM). "It was a little like going back to something that wasn't necessarily going to be particularly challenging. Gandalf is still inside me, as it were, so the business of getting to know a new character -- I was sort of going to be robbed of that," said McKellen in the interview. At his age a lengthy shoot, mostly outdoors and far from home, likely isn't exactly an attractive prospect, either. Still, all it took to bring him back to the franchise was a few words from a friend. As McKellen describes it, "You felt, how many millions of people are waiting for it? They wouldn't understand if you weren't as keen as they were." It's an interesting thing--so often when an actor pulls away from an iconic role for the sequel, there's a minor eruption on the Internet asking "What about the fans?" and essentially suggesting that the actor in question is somehow ungrateful for his success. He added that both he and the director prefer Gandalf the Gray, the version of the character who appears in The Hobbit and in the first Lord of the Rings. "Peter Jackson and I much prefer Gandalf the Grey, who was a man who did manage to enjoy himself," McKellen told THR. Apparently McKellen prefers to have a laugh between takes, and it's harder to do so when the character he's playing is so gravely serious all the time.