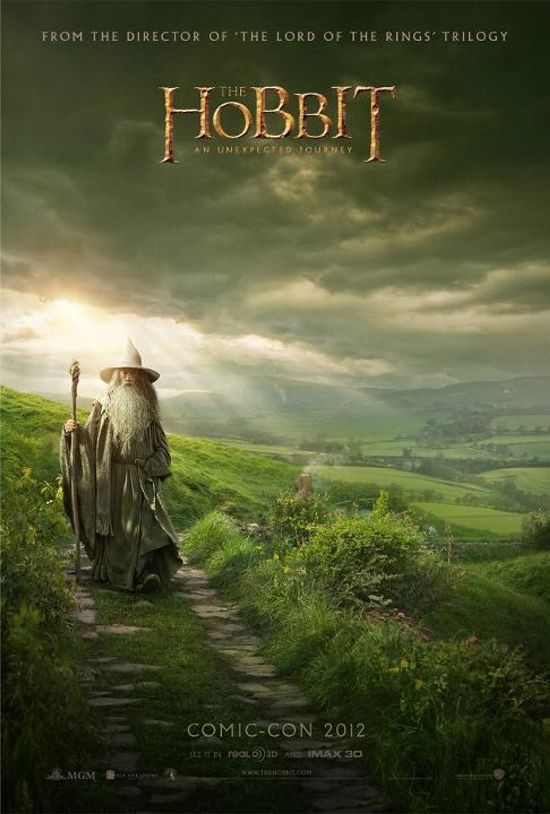 With Comic-Con set to kick off later this week, director Peter Jackson is doing his best to build excitement for The Hobbit: An Unexpected Journey. Several days ago, Jackson confirmed via Facebook that he will personally be appearing at Comic-Con in San Diego. And on Saturday, Jackson revealed an exclusive Comic-Con poster for The Hobbit. The Hobbit Comic-Con poster features Gandalf as he strolls through green pastures while the sun peaks out from storm clouds overhead. The Hobbit Panel at Comic-Con will take place as part of the Warner Bros. and Legendary Pictures Panel which occurs between 2:30 PM and 5 PM on Saturday, July 14, 2012. The Hobbit: An Unexpected Journey tells the story of an adventure that begins 60 years before the events depicted in The Lord of the Rings Trilogy. The film follows Bilbo Baggins, Gandalf, and a band of 13 Dwarves led by Thorin Oakenshield on an epic quest to reclaim the lost Dwarf Kingdom of Erebor from the fearsome dragon Smaug. The Hobbit's cast includes Ian McKellen, Richard Armitage, Cate Blanchett, Hugo Weaving, Ian Holm, Christopher Lee, Hugo Weaving, Elijah Wood, Orlando Bloom, Evangeline Lily, and Andy Serkis. The Hobbit: An Unexpected Jury is set to premiere in theaters on December 14, 2012.