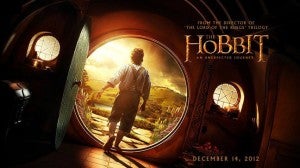 Peter Jackson confirmed this morning something that has been widely assumed since his appearance at San Diego Comic-Con International earlier this month: that his pair of films adapting J.R.R. Tolkien's The Hobbit would in fact be split into three, with each installment being released a year apart beginning in December with the release of The Hobbit: An Unexpected Journey. "Upon recently viewing a cut of the first film, and a chunk of the second, Fran Walsh, Philippa Boyens and I were very pleased with the way the story was coming together," Jackson said in a statement, as quoted by The Hollywood Reporter. "We recognized that the richness of the story of The Hobbit, as well as some of the related material in the appendices of The Lord of the Rings, gave rise to a simple question: do we tell more of the tale? And the answer from our perspective as filmmakers and fans was an unreserved 'yes.' "We know the strength of our cast and of the characters they have brought to life," the Oscar-winning director continued. "We know creatively how compelling and engaging the story can be and—lastly, and most importantly—we know how much of the tale of Bilbo Baggins, the Dwarves of Erebor, the rise of the Necromancer, and the Battle of Dol Guldur would remain untold if we did not fully realize this complex and wonderful adventure. I'm delighted that New Line, MGM and Warner Bros. are equally enthusiastic about bringing fans this expansive tale across three films." Deadline is reporting that there doesn't appear to have been any negotiations with talent yet to compensate them more for the three films than for the two they had signed on for, although that would seem like a no-brainer considering that earlier reports had suggested that adding a third film would require some reshoots on the just-wrapped production. Jackson first started considering breaking the movies up from two films into three after re-examining more than 100 pages of supplemental material regarding the story of Bilbo Baggins included in an edition of Lord of the Rings: Return of the King, the third part of the Lord of the Rings trilogy, for which Jackson won a Best Picture Oscar.

The Hobbit Split Into Three Movies