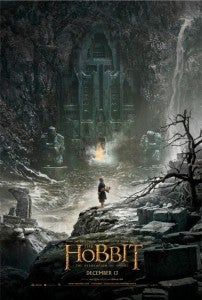 Peter Jackson released a new, behind-the-scenes production blog for The Hobbit: The Desolation of Smaug today but prefaced it by letting fans know that there are no plans to present footage from the film age San Diego Comic-Con International this year. "A couple of days ago, I told Warners that I just really wasn't ready to present anything of The Deslation of Smaug at Comic-Con this year," Jackson says in the video embedded below. "We're still shooting and we're going to be shooting through the period of Comic-Con so we looked at what actors we could send to make a really cool panel--there wasn't really anybody available, I can't go. So faced with that the prospect then was to record some messages and have a really cool sizzle reel. The problem is I'm so busy shooting--working six days a week, trying to get these pick-ups done, that every hour that I spend focusing on a really great reel for Comic-Con (and it would have to be great) would be hours spent away from the vital job of making the second and third Hobbit films as cool as they can possibly be." Saying that the hands-on way he deals with the Comic-Con material makes it a time-consuming process, Jackson apologized to fans disappointed but said that "I just had to take the Comic-Con burden if you will off my shoulders...I didn't want to send anything this year that was going to be less than fantastic." Ironically it was last year when Jackson, speaking with fans at Comic-Con, revealed that the second of two planned Hobbit films would be split into two to make a new trilogy.

The Hobbit: The Desolation of Smaug Footage Won't Be Screened at Comic-Con