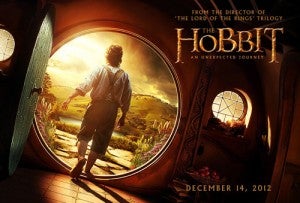 Yesterday, Peter Jackson released his newest video blog from the set of The Hobbit: An Unexpected Journey in New Zealand. Touring the area, Jackson does something that he's gotten pretty good at over the last decade or so of talking about the Lord of the Rings trilogy: discusses the natural beauty of New Zealand and explores some of the places where he's been shooting films based on J.R.R. Tolkien's beloved series of fantasy novels. There's nothing much here that's actually on a live set, so spoiler-phobes should be fine checking this one out to get a general sense of the look and feel of the film without necessarily catching more than a glimpse at actors in costume. The Hobbit: An Unexpected Journey comes out December 14, 2012.

The Hobbit Tour of New Zealand With Peter Jackson