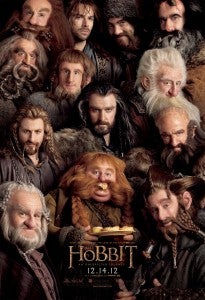 In a new production video blog, Peter Jackson tells fans that The Hobbit: An Unexpected Journey is still not completely finished, and that it's scheduled to be ready just two days before the film's premiere. It's an ambitious undertaking that they say requires eight buildings' worth of employees and resources -- one of which is the building they had for the same processes on the Lord of the Rings trilogy. Just in case you were worrying that these films wouldn't be sufficiently epic in comparison. One assumes that's one of those things that simply couldn't have happened in the days before digital, but the upside is that the production crew is still around, and haven't yet take what we're assuming will be about a week-long vacation between the two films. That means they can tell us about all the cool stuff they're working on. Check it out below.