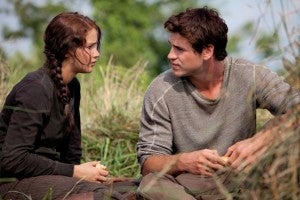 , this weekend's box office juggernaut which adapts the first in a trilogy of young adult novels from writer Suzanne Collins, grossed $10.8 million on Monday, making it the highest-grossing Monday ever for a movie that wasn't released on a holiday weekend. Combined with its $152 million opening weekend, The Hollywood Reporter is now projecting that the film could stand to make around $350 million domestically, after Lions Gate spent only about $80 million to make it. The film's stars are still not completely out of promotional mode, in spite of the phenomenal opening weekend, with Josh Hutcherson and Liam Hemsworth taking turns on Conan this week to talk about the movie. Check out the video below for a...somewhat less-than-authentic...clip from the film, courtesy Conan O'Brien.

The Hunger Games: $11 Million on a Monday?