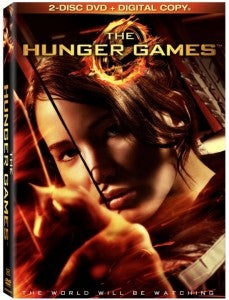 While The Expendables 2 might be ruling the box office this weekend, it's The Hunger Games that is creating excitement in retailers across the nation. Saturday, August 18, 2012 marks the official release date of The Hunger Games DVD in the United States, and various retailers across the country marked the event with midnight release parties last night. In what has to be the biggest DVD release of the year so far, various cast members also showed up at Wal-Marts across the country. Cast members participating in midnight release parties included Leven Rambin, Alexander Ludwig, Willow Shields, Jack Quaid, Dayd Okeniyi, Ian Nelson, and Ehtan Jamieson. According to tweets and Facebook posts, cast members signed autographs for fans, and there were long lines as would be expected. In fact, even many of the stores that threw midnight release parties without cast members had large crowds and robust sales according to reports. Thousands of Hunger Games fans have been tweeting their purchases of the Hunger Games DVD at either midnight release parties last night or at store openings this morning. Because many retailers like Wal-Mart, Costco, Target, and Best Buy are offering exclusives, some Hunger Games fans are picking up multiple copies of the DVD to collect them all. According to the official release information from Lionsgate, the Hunger Games home entertainment offerings include 2-disc DVD (plus digital copy), 2-disc Blu-Ray (plus digital copy), VOD and digital download. The 2-disc Blu-ray and 2-disc DVD include over three hours of extensive bonus materials including the comprehensive eight-part documentary, "The World is Watching: Making of The Hunger Games." Other features include a conversation with director Gary Ross and featurettes on the success of the books, the creation of the control room in the film and the filmmakers' motivation behind creating new scenes that were not in the book. In the Hunger Games Blu-ray Disc, there is an additional exclusive feature called "Preparing for the Games: A Director's Process," which looks at the progression of taking three key scenes from the book to the screen.

The Hunger Games DVD Launches With Parties And Robust Sales