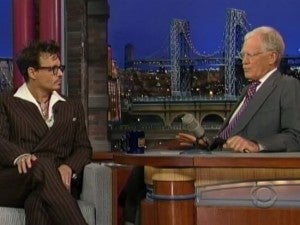 On Thursday night, Johnny Depp paid a visit to the Late Show with David Letterman to talk about The Lone Ranger movie. Johnny Depp opened up to Letterman about the past portrayal of Native Americans in movies and TV shows and how he wanted to change that perception. Johnny Depp said, "Ever since I was a kid, I mean I was a very little kid watching The Lone Ranger series on TV, I always had a fascination with the series, and I loved Jay Silverheels, I loved the series. But I was always sort of perturbed somehow by the fact Tonto was thought of as the sidekick." As Letterman chimed in that Tonto was the errand guy, Johnny Depp agreed, "The errand boy, it just didn't set well. So it's been something I've felt very passionate about for a long time. And the idea that Native Americans have been misrepresented horribly throughout the history of cinema and television, so I thought it was a great opportunity to flip that cliché on its head and bring the respect back to these people…these dignified people." When asked if he sought approval from Native Americans on his character, Johnny Depp said, "Oh, most assuredly, I went to…I had a very close relationship with the Comanche nation and the Navajo allowed us into their world as well, and learned quite a lot. They were very, very helpful." Johnny Depp added, "It was approached with only good intentions. And if there's fifteen kids…twenty kids on a reservation somewhere who can watch this film and walk away feeling proud of their heritage, proud of their culture, and want to keep their language…their culture alive. If they get that, then I fell my job is done."