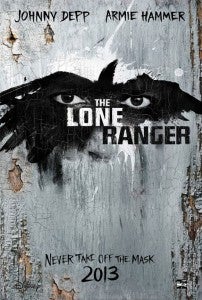 A representative for Walt Disney Studios has reached out to ComicBook.com to deny allegations that The Lone Ranger is headed back for reshoots, calling the original report "absolutely untrue," "inaccurate and wrong." As noted below in the comments, it's possible that Moviehole's source may have been confused by a portion of the shoot which was previously scheduled for September 2012, ended up being rescheduled for March. In any event, Disney says there's no reshoots, and incidental evidence suggests that the additional photography that led to the initial report may be photography that was always planned to happen. This is good news for Disney, obviously, as Gore Verbinski and Johnny Depp's previous collaboration for the studio - the Pirates of the Caribbean movies - were consistently some of Disney's highest-grossing films. Despite the widely-reported budget concerns, it's likely there are a fair number of executives at the House of Mouse who are expecting big things from The Lone Ranger. Original story - Gore Verbinski's ambitious, big-budget adaptation of The Lone Ranger, which went into production in 2012 after a false start where it almost looked like ballooning costs would sideline the film entirely, is headed back for what sound like some pretty major reshoots, according to Moviehole. Armed with information from Wall Street film analysts, a reporter took to the site this morning to predict that 2013's biggest cinematic surprises are likely to be The Hunger Games: Catching Fire and The Lone Ranger, with the latter being a not-so-good surprise. "I suggested as much on Twitter last night – upon hearing that the film was headed back into reshoots at the end of the month (they're writing in another character.. at this late stage!?) – and now the steel-ball clamoring crew of Wall Street are also predicting Disney's ostensibly-cursed "Lone Ranger", starring Johnny Depp and Armie Hammer, will be the year's biggest fizzler," wrote Moviehole. Heading back into production on a film can happen for a variety of reasons, but if those reasons are benign (as in, "we didn't get that shot quite right" or "we want to clarify these two scenes by adding a bridge"), it doesn't tend to involve extensive rewriting, which it sounds from context is the plan here. "Writing in another character" doesn't sound like they're adding a clarifying scene in which a new character is featured, but reshooting multiple scenes to insert a character who wasn't there when the scene was shot; that's likely to create some pretty awkward blocking and dialogue in those scenes, unless there's pretty extensive reshooting. It's worth noting that Disney has expressed concern from the beginning that this film's budget was out of control--sending it back into production will likely add to that cost, even before you consider that a newly-introduced character will mean hiring another actor to play that role and paying that person. Besides Catching Fire, Moviehole's analyst predicts a big box office take for Man of Steel as well.