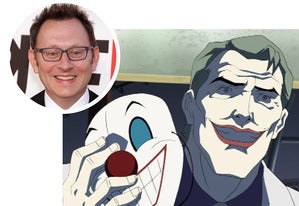 Michael Emerson, who played Ben Linus on the ABC series Lost, will take the reins of DC Entertainment's most iconic villain when he steps into The Joker's clown shoes next year with the release of Batman: The Dark Knight Returns, Part 2. And earlier today, TV Guide gave fans a first look at the character as he'll appear onscreen. "He's one of those great villains that an actor like me likes to play because he has layers — he has a face for the world and a face for himself," said Emerson. "He is, in a way, a villain who is a natural actor. All of that is that is delightful and confounding at the same time." Emerson, who typically plays quiet, reserved, Machiavellian types, also said that playing a character who's so larger than life is a totally different experience. "It's freeing because of the largeness of it," the actor told TV Guide. "When he laughs, there's nothing subdued about it. When he screams in rage, there's nothing controlled about it. The amp is turned to 11 at all times." The first installment of the two-part animated epic based on Frank Miller's best-selling graphic novel is due in stores in three weeks; the second part, which will feature Emerson's Joker, won't hit until 2013. Emerson will be only the second actor to play The Joker in a feature film since the untimely death of Heath Ledger, who won a posthumous Academy Award for Best Supporting Actor in The Dark Knight. The other actor was Futurama's John Di Maggio, who played the part in Batman: Under the Red Hood.

The Next Movie Joker: The Dark Knight Returns Releases Image